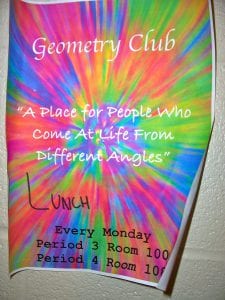 Pondering geometry may invoke memories of deciphering the true nature of a polygon. The geometry club is not a location to tackle math problems, but it is definitely a safe space for students who ‘come at life from different angles’ to go during lunch on Mondays, either in room 100 for period three, or room 108 for period four.

The geometry club, STA’s newest endeavour on the block connected to Humans for Humanity, is led by student council Vice President Tyler Wisner, and Chaplain Rerecich.

Chaplain Rerecich explained that the geometry club is a drop-in centre with flexible membership for students, especially those who feel isolated or have difficulty making friends, to play board games and hang out.

Mr. Wisner stated in an online interview that the geometry club “…allows for a space space for anyone who is looking for a place to hang out free of judgement.”  He said the club was geared toward students of the LGBTQIA+ community, although it is not just for them.

The geometry club was named after a 2013 film called The Geometry Club, about a group of ordinary teenagers trying to decide who they really are in the world.

In an April 30th, 2013 Huffington Post article, Newport Film Festival’s ‘The Geometry Club’ Depicts the New Normal of Gay Relationships, by John Lopez, Mr. Lopez commented on the movie by writing “Films have that great soft power of slowly but surely dissolving our prejudices and preconceptions, as they acculturate us to the glacial but inevitable changes in how we as a society live our everyday lives.” The premise of the movie helped build the foundation of STA’s own geometry club.

Humans for Humanity member Elisar Haydar also explained that the idea for the geometry club sprouted from her and Mr. Wisner’s association with the Reach Out Centre for Kids (ROCK), or more specifically, one of their connected programs called the Positive Space Network Youth Action Committee (YAC). ROCK has six centres across Halton that help families and promote the importance of mental health awareness.

YAC is dedicated to serving youth, especially LGBTQIA+ youth and their families, through promoting events such as Halton Pride on June 4th, 2016 in Burlington Central Park. They also have started special groups, held in various locations around Halton, which welcome and provide a safe space for gender independent or trans-identified children, youth and their families.

The idea behind creating a safe space for anyone to drop by and relax inspired Miss. Haydar, Mr. Wisner, Humans for Humanity members and Chaplain Rerecich to create a similar program within STA. And therefore, the geometry club was born.

Mr. Wisner mentioned that the notion of going to a safe space was a punny way to get the message of the geometry club across. In addition to this, he added “Also the slogan ‘a place for people who come at life from different angles’ was too catchy to let go.”

Chaplain Rerecich said that she knows some students can feel friendless for a variety of reasons, and that lunch can be the most difficult part of the day if someone is lonely. Miss. Haydar also added that Humans for Humanity tries create a “welcoming vibe” at STA to make the school accessible for everyone. The geometry club is one of many projects that help promote diversity, positivity, and the importance of inclusion.

Chaplain Rerecich would like students to know that “we are more than what we produce in class,” and her leadership role in this club allows her to truly help students who suffer from anxiety or loneliness feel that they fit in somewhere. Because at the end of the day, everyone just wants to feel loved.