The volleyball season is well underway and the senior boy’s volleyball team has been hard at work, practising twice a week to ensure they make the most out of this season. The team, which currently occupies fourth place in the league standings, is excited to bring their game to the playoffs this November.

Coached by Ms Bradica and Ms Camastro, the team began tryouts the second week of September. The boys have already played five regular season games and have competed in two tournaments.

Ms Camastro says that one of the team’s strengths is that it “is able to step up their game when they face tougher competition.” She added that the team has experienced “setters” and that their height is above average when compared to the rest of the league. Ms Camastro also said that they have some things to work on before the playoff season. “Getting used to playing together is a challenge,” she says, “as we lost many players last year. So these guys really need to find their groove. We have also been consistently working on our passing and blocking.”

Here Is A Rundown Of The Games/Tournaments You May Have Missed:

The boys played their season opener game on Tuesday, September 15 at Assumption. The team played two sets and took home the victory.

On September 21st the team competed in their first tournament at Assumption. The team made a semi-final appearance and team member Chris Sagl won The Assumption Hitting Competition.

The team played their second game at Jean Vanier in Milton on September 27th, where they were victorious in two straight sets and claimed the victory.

On September 29th the boys took part in the annual Raider Nation volleyball tournament where they made a semi-final appearance. 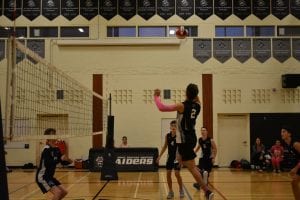 On October 7th the team travelled to Georgetown to contest the highest ranking team in the league, Christ The King. STA won their first set, 25-23. Then they played a tight scoring second set, losing by only one point. The boys battled it out in a third set but ultimately lost by only two points.

On October 9th the team played a match at Loyola. The boys were nipped in their first set, by a score of 25- 23. STA made a comeback, winning the second set but were unfortunately defeated in the final.

On October 16th, the boys took another tough loss, playing a home game against Bishop Reading. The team started off strong, winning their first set, but were conquered in their second and third sets, losing each set by only two points.

To get to know the team a little bit more, we asked the players and their coaches some questions:

What do you think has been your best game so far?

“Our best game was definitely against Christ The King. Although we lost the game, I feel like we really came together as a team and showed that we can play with the best teams in the league.”

What has been your most memorable moment so far this season?

“When Raul bounced the fun set.”

What is something people would be surprised to know about any of the team members?

“Jimmy Bueno is a great dancer!”

What is the most interesting part of coaching the team?

“The hilarious things they do in the huddle.”

What’s Ahead For The Team?

The team plays two games this week at Notre Dame and Holy Trinity, before returning to STA  on Tuesday, October 30th to play a home game against Corpus Christi. The playoff season will begin in early November, so make sure you come out, watch a game and support the team before the season comes to an end.

We wish the volleyball team a fantastic season this year and hope that they bring the trophy back to STA!