The cast of Peter and the Starcatcher took their final bow on April 28th which was the end of two and a half months worth of hard work and dedication. The actors put on an amazing show that made Theatre Aquinas proud.

The play follows a nameless orphan boy, who’d become Peter as he travels to The Neverland with his friends Prentiss and Ted. There, they meet Molly, played by Hannah Barker, who was the daughter of the twin ship’s captain. After that, the audience is brought along on their adventures. 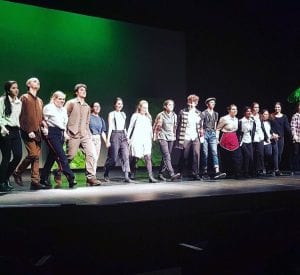 From swashbuckling pirates to dancing mermaids and molluscs that ate tiramisu, the cast made memories that will last long after the final curtain call. Not only was the cast a family when aboard the Neverland, but were friendly backstage as well. As they said their tearful goodbyes, they recognised that ‘it’s supposed to hurt — that’s how you know it meant something.’

About Jessica Hales 14 Articles
Welcome! I'm Jessica and I hope you enjoy my articles! Don't forget to come later for more amazing content from my fellow writers and I.