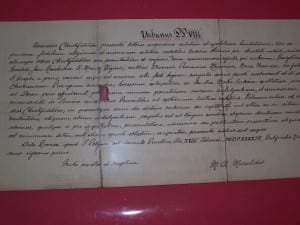 The original copy of the papal bull written by Pope Urban VIII in 1644.

There’s an ancient bull on the loose in room 218, only this one does not have sharp horns. It does not become agitated when you wave a red cloth in its face, and it cannot stomp you to death on a tiny, cobblestone street within the depths of Spain. Instead, it is a papal bull from 1644.

Mr. Catlin believes this document to be important because it put Canada on the map, and showed the world that it had an outpost of the Catholic faith within the wilderness. Pope Urban VIII’s papal bull was an official document that granted blessings from Heaven to Canada and the tiny community where the copy was sent. In 1644, Canada was unknown and insignificant, and the papal bull that Pope Urban VIII wrote showed the world that blessings could and should be given to all areas of the Earth, not only the rich and well-known ones.

In 1984 Pope John Paul II visited the original copy of Pope Urban VIII’s papal bull to recognize its importance. Mr. Catlin believes that people in 1644 would’ve never imagined a Pope would visit Canada, and the fact that this event did occur demonstrated just how important Pope Urban VIII’s papal bull is to the Catholic Church, as well as historians, theologians, archeologists and researchers across Canada. At the moment, the copy of the papal bull is encased in an acid-free plastic coating, and it must be kept away from direct sunlight so it is not damaged. Sadly, the document was taped together with masking tape, which will corrode it. Mr. Catlin explained that to truly protect it, it must be taped together with acid-free tape. He also stated: “I am honoured and humbled to be given the privilege of caring for this important spiritual document.” To him, the document is so amazing that is does not have a monetary value. It is a priceless historical artifact that must be protected and cherished.