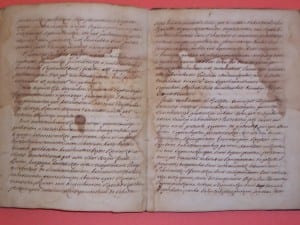 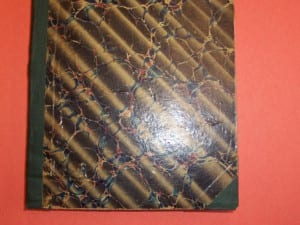 Photos of the bound manuscript.

Amongst dust bunnies and abandoned things within a church basement in New York, an abandoned bound manuscript was desperately longing for a home. Its story is truly mind – blowing. The manuscript was about to be thrown away, but it was found by a cleaning lady who showed it to Mr. Catlin. He brought it to St. Marie Among the Hurons near Midland, Ontario, investigated further, and discovered that it was in fact a bound manuscript that was what one historian referred to as “the most Canadian document there is.”

The bound manuscript is estimated to be from the 1600s to the mid 1700s. It is originally from an old village called Caughnawaga. It was written by two Jesuits, Father Jacques Bruyas and Father Pierre Daniel Richer, who were missionaries to the Huron and Mohawk people in Quebec. The document contains the two distinct handwriting styles of the Jesuits, and Mr. Catlin explained that through careful analysis, he determined that Father Jacques Bruyas wrote the earlier text from the 1600s, and that the portion from the 1700s was by Father Pierre Daniel Richer.

The bound manuscript is a unique combination of the Mohawk and Huron languages. Mr. Catlin mentioned that historians have theorized missionaries devised a special Church language, which was a combination of the two languages, so that both Mohawk and Huron peoples could listen to and understand a homily. The manuscript also contains three distinct parts. The first part is a series of homilies for all saints within the time period of the end of May to all of June. The second part contains additional saint homilies for the month of November. And the final twelve – page part is a record of the life of St. Catherine Tekakwitha. She was canonized in 2012. Mr. Catlin said that her mother was Mohawk and her father was Algonquin. Despite social pressure to marry and have a family, St. Catherine Tekakwitha decided to devote her life in quiet prayer and contemplation.

Mr. Catlin also believes that this document is amazing because it is a not a dictionary of the Mohawk and Huron languages, but it clearly demonstrates how the two languages were used by Indigenous peoples in everyday life. It shows proper sentence structure, and the unique style of the two languages.

This document is very important because it is completely Canadian. It was for a Mohawk, or Indigenous audience, about a Canadian Mohawk saint, and written in truly Canadian Indigenous languages. According to Mr. Catlin, this bound manuscript is a fossilization, or an early record of Native language, and extraordinary in that both Mohawk and Huron people could understand it. However, from a Catholic perspective, this bound manuscript is also exceedingly special. It is an early biography of a Catholic Canadian saint, which outlined her unique virtues, spiritual gifts, and a never – ending relationship with Christ.