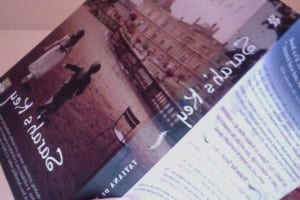 On Wednesday March 9, book club members converged in the library over a sweet feast of cupcakes, cookies and chocolate eggs to discuss thoughts on their latest find – Tatiana de Rosnay’s Sarah’s Key.  The discussion exposed interesting considerations into the nature of evil, ignoring wrongdoing, and searching for the truth.

Sarah’s Key is a novel featuring two very different perspectives. It follows the story of a modern journalist named Julia Jarmond, who attempts to uncover France’s involvement in the Holocaust and the persecution of Jews, particularly the Vel’ d’Hiv Roundup of 1942. The narrative also flashes back to the time of the Holocaust, when a young, Jewish French girl named Sarah tells the painful story of being forced from her home with her two parents in the middle of the night by the French police. She is a victim of the Vel’ d’Hiv Roundup, but escapes in a desperate attempt to make it back to Paris to free her brother. As the police are at the door, Sarah’s tells him to hide in a locked closet within their apartment. She promises she will return quickly.

However, Sarah does not come back soon enough; an action that will forever link her to the family of Julia’s husband, and Julia by extension. The novel is a gripping tale about the thin thread connecting past and present, and the importance of exposing the truth; no matter the cost. Book club members extensively discussed the topic of the Holocaust; coming to the conclusion that sometimes what we are taught is not necessarily the whole story. For example, the discussion revolved around the idea that Germans were not bad people. During the rise of Hitler, they were starving, uneducated, and desperate. This made them easy to take advantage of, and helped Hitler place the crippling blame of the German loss of World War I on Jews. However, book club members also mentioned that turning a blind eye to evil is almost as bad as supporting it, which is exemplified in the novel as local townspeople do not speak up about the Vel’ d’Hiv Roundup. This discussion also led to identifying areas in society where positive change is needed, such as treatment toward Aboriginal people, Muslims, and women. Book club members agreed that they did enjoy the novel, and that it conveyed many interesting themes and topics to talk about. The next book they hope to read is My Sister’s Keeper by Jodi Picoult, and the meeting date shall be announced soon.