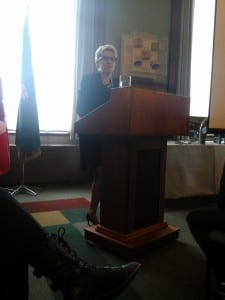 Within the massive stone building of the Ontario Legislature at Queen’s Park in Toronto, the laws that govern the lives of all Ontarians are debated, passed, and some are shot down as well. For three extraordinary days, I got the chance to go behind the scenes of Ontario’s extraordinary governmental system and experience something few teenagers will ever witness: the chance to learn about the Ontario Legislature firsthand, and the true political sphere of Ontario.

From February 24 to the 26, I spent long eight to eleven hour days at the Ontario Legislature. However, the incredible journey began way before then in November, when I received confirmation that I had been admitted into the program. From that point on, I participated in my party’s leadership race (however I was unsuccessful), bill writing, meetings, and countless discussions of how my party was going to defend our bill after it was chosen. The first day at the Legislature was slightly nerve-wracking as I headed onto a packed Go Train early in the morning, rode another subway train directly to Queen’s Park, and then walked to the legislature building. The early – morning wind was freezing, but it was warm inside the building. As I looked around at all the other young faces in the room I was directed to, I wondered what was going to transpire over the following days.

The first order of business was an official welcome by Deborah Deller, the head clerk at the Ontario Legislature. She takes notes, answers questions from MPPs, times speeches, and has many other non-partisan duties associated with the Legislature. I got the chance to watch MPPs debate during Question Period, and listen to them, as well as other workers at the Legislature, discuss their chosen professions and answer questions.

From then on, the program was a whirlwind of caucus meetings and discussions as we all attempted to prepare for Friday’s debate and vote, as well as listening to speeches from Steve Clark, (Deputy Leader of the Official Opposition), Premier Kathleen Wynne, and Lisa Gretzky (MPP for the New Democratic Party).

Friday February 26 was an amazing day I shall never forget, because it was an opportunity to sit in the seats of true MPPs at the Ontario Legislature and debate three bills from each Model Parliament party – the Liberal party, the New Democratic party, and the PC party. One Liberal member wrote a bill proposing the law of Physician Assisted Dying, which many other Liberals voted for and therefore it was the one we debated in the Legislature. The one for the NDP, or the Official Opposition, was a bill to tie the minimum wage to the living wage, and the bill for the PC Party, or the Third Party, was a bill to create an optional lifesavers CPR course in secondary schools across the province. The Liberal bill passed, and the two other bills failed when they were all voted on.

The model MPP for Mississauga South, who also happened to be my brother Henry Mann, mentioned in regard to the program that: “It was a fun experience, and it was educational, and I’d recommend it to anyone, really.” Model MPP for Etobicoke – Lakeshore Michael Bellucci also stated: “I had an amazing time experiencing first hand how our parliamentary system works and meeting wonderful, like – minded people.” Ontario Model Parliament was an extremely eye – opening experience, which revealed that it is never too early to discover how provincial government impacts lives every day.